Battlefield Of A Peaceful Warrior

The truth will eventually set you free. But first, it needs to piss you off. 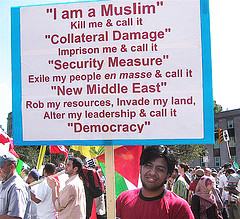 If Arabs invaded America, killed a million Americans with WMDs, occupied the country with Arab troops, tortured Americans in gulags like Abu Ghraib, shot at Americans in minivans, raped 14 year old American girls, brought in Arab companies to steal American resources at gun point how many Americans would be willing to let those Arab troops stay?

America invaded Iraq a country that posed no threat to us, killed a million Iraqis with WMDs, destroyed Iraq’s infrastructure (now being rebuilt and paid by American taxpayers), tortured Iraqis in Saddam’s torture chambers and Abu Ghraib prison, brought civil strife to Iraq, took over Iraq’s oil and you expect them to want American troops to stay?

You have to be seriously brainwashed to believe Iraqis want us to stay.

“Give me liberty or give me death” is not just Pat Henry’s philosophy. It was written in blood on the sands of Karbala, Iraq by Imam Husayn (the 3rd spiritual leader of the Shia) 1,400 years ago.

The US military in Iraq hired firms to conduct focus groups amongst a cross section of the population. A summary report of the findings was obtained by the Post. Here are some of the highlights of the report as disclosed by the newspaper:

Until the March 2003 US occupation Sunnis and Shiites coexisted peacefully.

Iraqis of all sectarian and ethnic groups believe that the US military invasion is the primary root of the violent differences among them.

A sense of “optimistic possibility permeated all focus groups … and far more commonalities than differences are found among these seemingly diverse groups of Iraqis.”

Dividing Iraq into three states would hinder national reconciliation. (Only the Kurds did not reject this option.)

Most would describe the negative elements of life in Iraq as beginning with the US occupation.

Few mentioned Saddam Hussein as a cause of their problems, which the report described as an important finding, implying that “the current strife in Iraq seems to have totally eclipsed any agonies or grievances many Iraqis would have incurred from the past regime, which lasted for nearly four decades — as opposed to the current conflict, which has lasted for five years.